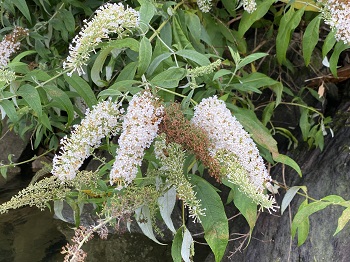 Rusty and I had an interesting experience at Wright Creek Falls today. While we were there with a tour group enjoying the beautiful afternoon, there was a VERY loud bang - like close storm thunder, followed by what sounded like a Jurassic Park T-Rex crashing down the very steep hillside, laying waste to small trees and brush like matchsticks as it descended. A VERY large dead tree had fallen above our position and was careening down with tremendous force. It came into view brief moments after the noise started and was startling in its size. Just before it got to the bottom of the slope, it was caught up in a snag of Rhododendron, Mountain Laurel and some large trees, and came to an abrupt stop. We all looked around, partly stunned by the intense and sudden quiet that surrounded us – by contrast to the previous seconds. It happened so fast - it was over before we could fully comprehend what we had witnessed. You'll see the aftermath next time you're there if you look up and to the left of the falls. The lake is beautiful. The heavily wooded steep slopes that are such an integral part of the Jocassee Gorges and the unique environment here offer constant reminders of the power of nature and its long and relentless cycles. These tree falls happen often, but we are rarely fortunate enough to be there, especially so close, when they occur. It was “way cool”. ~Don Williams, JLT guide

JOCASSEE BLOOM REPORT: On a recent kayak tour our group spotted a shrub in full bloom where the Horsepasture River channel meets the Toxaway River channel. The butterfly bush (Buddleja davidii) provided a spectacular show. They are showy and beautiful - like many invasive plants - thus planted widely. Then they spread, displacing our native species. Just above the butterfly bush was another invasive, the princess tree (Paulownia tomentosa). This species is an especially aggressive invasive, in large part due to the winged seeds that can travel 3-4 miles before reaching the ground and germinating, significantly impacting our natural plant communities. While I have seen the princess tree scattered in several locations on the lake, this year's spring blooms illustrated how extensive it is on the Jocassee shores. On the brighter side… our group paddled up Horsepasture to where the river meets the lake near the Foothills Trail bridge. There we saw one of my favorite mid-summer bloomers, the Mountain Sweet-Pepperbush (Clethra acuminata), just starting to bloom, with many small flowers on a raceme (flower stalk) coming out of the axils of leafy branches. ~David White, JLT kayak & tour guide